His Majesty, Hangul the Filler

Revealing the secret behind the Stack Trace Art's magic. 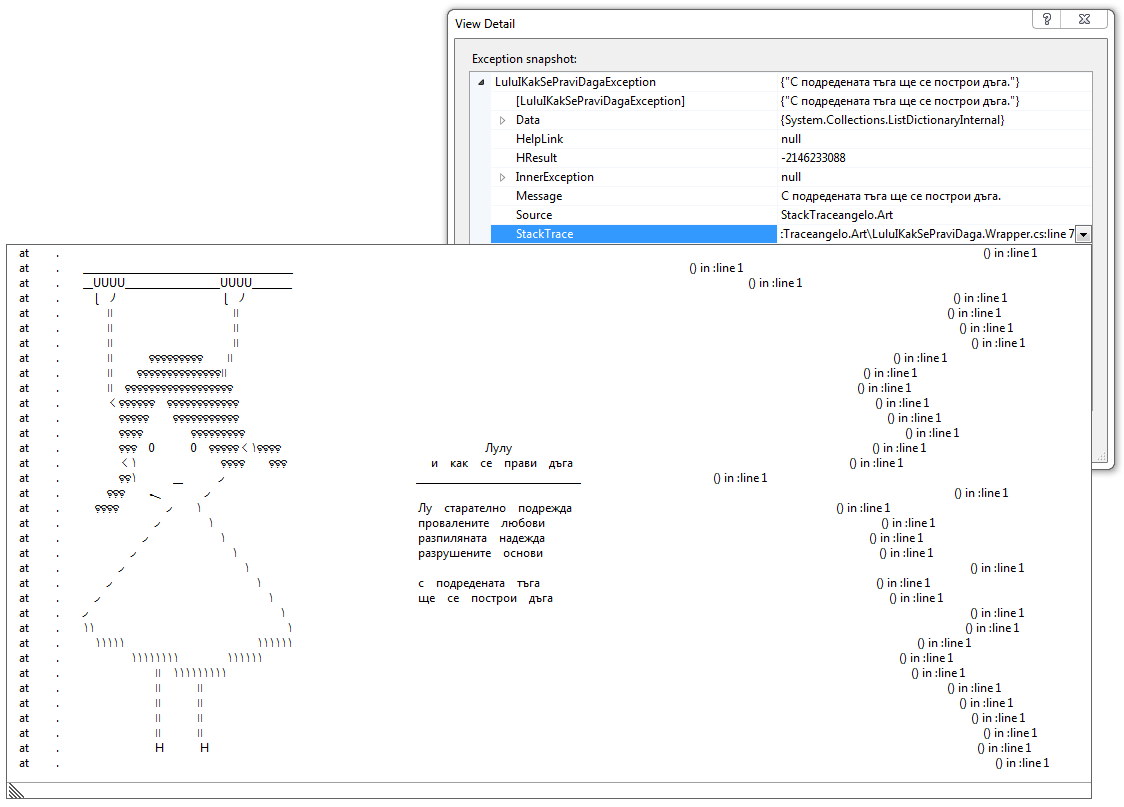 Any sufficiently advanced technology is indistinguishable from magic.

Today I got a comment on my original post on Stack Trace Art. The word magic occurs twice in it. That word represents so well the common feedback on Stack Trace Art I already got several times. “Wait a second! How did you do it? Do you rewrite the stack trace information somehow? These cannot be real method calls!”

My answer usually produces question marks above the heads of my fellow .NET programmers: “No. This is a genuine .NET exception like any other. No tricks of any kind. Stack Trace Art isn’t about tricks. It’s about throwing a real exception that will create a drawing on the caller’s stack trace. A beautiful drawing, please.”

The comment motivated me to finally explain how Stack Trace Art works. As you will shortly see there are no tricks or magic in it. As Clark’s law says, it’s just technology.

That “sufficiently advanced technology” that makes Stack Trace Art appear as magic is a combination of these two facts:

Ladies and gentlemen, prepare to meet His Majesty, Hangul the Filler.

I’m not sure what the majority of C# programmers out there would say if confronted with the following question: “Will the below code compile?”

Well, yes, it will compile. Not only because “Cvrči cvrči cvrčak” is such a well know tongue twister in my language(s). Neither because each of the methods represents a beautiful poem or song.

The reason is much simpler. C# identifiers are not limited to ASCII characters only. They support a vast range of Unicode characters.

And here is where my search for The Invisible Character began. “If I could only find”, I thought, “a Unicode character that is a valid C# identifier character and at the same time ‘invisible’ exactly as spaces or tabs are ‘invisible’! That would turn my artist-wannabe-idea into reality! That would allow me to go a step further and write this:”

(Oh, by the way, copy-paste the above code to your C# IDE of choice and compile it. Of course it will compile! No need to ask :-))

The Quest for The Invisible Character

I crossed my fingers hoping that such character exists and quickly turned the C# Identifier documentation into the (roughly) following piece of code:

(You can see the concrete implementation on GitHub. Be aware of the “Intentionally Bad Code” warning though ;-))

Next, I created a quick and dirty brute force algoritham that was supposed to help me catch my Invisible Character:

The algorithm was slow but it did the job. It yielded the following characters:

I can’t tell you how happy I was! I caught not only one, but several characters that were both ‘invisible’ and acceptable in C# identifiers!

After scanning the whole list it turned out that only four characters are giving a valid C# code.

And here they are in all their glory. The four Hangul Filler kings!

Putting it All Together

Finding The Invisible Character was the necessary precondition for the Stack Trace Art. The next step was to create a prototype of a usable Stack Trace Art editor. Such an editor was supposed to help me in turning my creative ideas into what I called “Unicode art”. In “Unicode art”, unlike ASCII art, spaces and tabs are forbidden. They are replaced with Hangul Fillers.

Once my ideas are turned into that “Unicode art”, the editor should assist me again and generate the code in the targeted programming language - the code that will actually throw a Stack Trace Art exception at runtime.

I’ve created such editor and called it stackTraceangelo. Although being just a clumsy prototype, I’m proud to say that it is the first usable Stack Trace Art Editor ever created :-)

In one of my upcoming posts I’ll explain how stackTraceangelo works.

If you like the Stack Trace Art and believe that it is the best thing in the history of art since van Gogh’s Almond blossom - than contribue to it! There are a plenty of things that you can do. Add a support for another target language to stackTraceangelo. Contribute to the gallery by creating your own Stack Trace Art. Or simply star the project on GitHub to show your support. Thanks!